A showdown with his leader over Fraser Island caused Moss to be moved to the media portfolio in June 1975. Once there, Moss exhibited a particular urgency to push through policies that were as significant as his environmental reforms.

He became increasingly concerned at the capacity for the Murdoch and Fairfax press to make or break governments. He got the press barons to sign up to a press council. Moss was a fan and defender of the irreverent new ABC station 2JJ, established a few months earlier, and was eager to increase diversity on the airwaves. He bypassed the Broadcasting and Television Act to issue 12 “experimental” licences to educational institutions. “Cass’ dirty dozen” laid the basis for today’s thriving community radio sector.

Moss was born in Narrogin, Western Australia, the eldest of three sons of Jewish Russian emigres Ben and Esther Cass. Ben was a GP, and all three brothers pursued medical careers.

In 1955, he married Melbourne-born Shirley Shulman, who introduced Moss to a world of bohemians, artists and filmmakers — “free thinkers” eager to discuss the progressive causes of the day. They moved to London, where Moss worked at Guy’s Hospital with Sir Russell Brock developing open-heart surgery techniques. In Australia, Moss built the first heart-lung machine in the country.

In 1964, Moss was recruited to head the Trade Union Clinic and Research Centre, a pioneering community health facility established in Footscray by the Meatworkers Union to deliver free treatment and promote preventative care to workers. The clinic heightened his awareness of social inequality and connected him with the left wing of the Victorian trade union movement, which supported his appointment to the Victorian ALP executive.

In 1961, he made a tilt at the federal seat of Kooyong, held by Robert Menzies, then La Trobe in 1963. Moss was finally preselected for the Liberal-held seat of Maribyrnong in 1969. Some party insiders were sceptical that a progressive Jewish intellectual, who lived outside an electorate with a large Catholic population, could prevail. Moss won, and served as a popular local member until his retirement in 1983. Maribyrnong has remained a safe Labor seat since.

Moss brought to parliament a calm, reasoned rhetorical style and a compassionate insight into social issues. Not shying from controversy, he devoted his maiden parliamentary speech to abortion law reform. Federal parliament’s jurisdiction over the ACT allowed Moss to sponsor pioneering private bills that would legalise abortion and decriminalise homosexuality in the territory. And, as an early proponent of evidence-based policy, in 1971 he invited members of the Senate committee on drug abuse to drop by his house and smoke some joints. 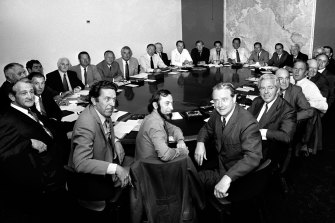 After 1975, Moss served as opposition spokesman on health, then immigration and ethnic affairs. The former saw him having to defend the Whitlam government’s Medibank scheme against onslaughts by the Fraser government. Moss had a long engagement with health policy and is renowned for introducing Whitlam to the health economists who would design Medibank — now Medicare — so he’s often mistakenly remembered as “the father” of our universal health insurance system. Moss thought Medibank was socialised medicine “lite”. He advocated for a nationalised health system based on salaried medical staff rather than the retention of a fee-for-service system that simply shifted the cost from individuals and private insurers to the government.

Moss’ parliamentary diaries and subsequent reflections on his career exhibit a frequent disappointment with the grandstanding of politics and at times an anguished guilt that he was an absent husband and father to his family. Unguarded and frank in his public pronouncements, Moss was often portrayed as a political fish out of water, something that could be seen as both a strength and a weakness: “A man of principle who refuses to take the vote-winning courses held out to him” in one commentator’s words; “fighting lost causes with amateurish zeal” in another’s. 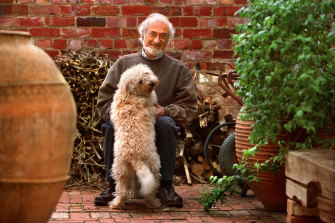 Moss Cass at home in Melbourne with his dog Milka in 2002. Credit:Angela Wylie.

Moss remained a dedicated and active ALP member into his 90s. But his primary faith was in those people working for change from below, whether rank-and-file ALP branch members, environmental activists, women compelled to access backyard abortions or draft resisters. Any reforming leader, he said, was pushed, sometimes against their inclinations, by unnamed and unnumbered ordinary people.

Anthony O’Donnell worked with Moss Cass and Vivian Encel on the biographical study Moss Cass and the Greening of the Australian Labour Party (Australian Scholarly Publishing, 2017)