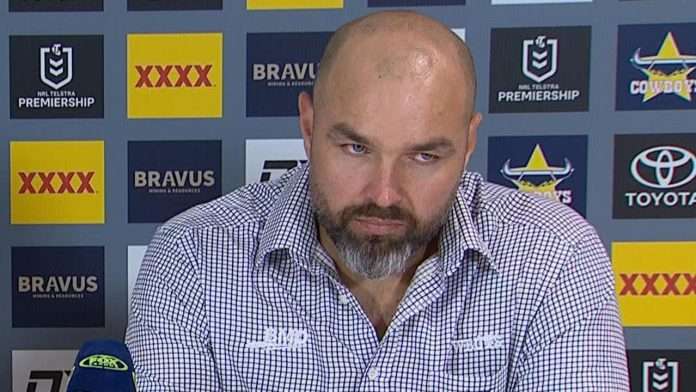 Cowboys coach Todd Payten has taken a stunning swipe at the officiating in his side’s 24-8 loss to the Roosters after three of his players were sin-binned for separate incidents.

A stone-cold Payten lashed the decisions in his post-game press conference and backed up a huge claim that Titans coach Justin Holbrook made a few weeks ago about smaller clubs not getting the rub of the green.

Payten did concede the Cowboys “were pretty dumb at certain times” — but he also didn’t miss when asked about the three binnings.

Stream every game of every round of the 2022 NRL Telstra Premiership Season Live & Ad-Break Free During Play on Kayo. New to Kayo? Try 14-days free now.

Tom Gilbert was sent in the 21st minute for a professional foul after obstructing Luke Keary. The Roosters ran in two tries while he sat in the sheds.

Payten said it was “hard to argue” with that decision but he was “really disappointed” with Griffin Neame’s binning and believes referee Gerard Sutton “got that wrong.”

Neame was given his marching orders for a late shot on halfback Sam Walker in the 50th minute.

“I know what they’re trying to do, as a game we’re trying to protect our halves but they were trying to stamp out that out when halfbacks take it in the line and they’re not looking with their back turned,” Payten said.

“I know Griff was in no position to pull out of that because he’d gone deep in the line, I thought he ducked. I think they’ve got that wrong.”

Halfback Chad Townsend was binned in the final 10 minutes of the game for a lazy arm that collected Lindsay Collins high. Payten called that decision “pretty soft.”

He then took aim at the match officials and doubled down on a huge call Gold Coast’s Holbrook made after Round 1.

Holbrook fumed about the 7-1 penalty count in the Titans’ loss the Eels, saying “it is about us as a club being not one of the big clubs and not getting anything.”

“There were some 50-50 calls tonight that went against us and the Titans head coach a couple of weeks ago made a comment and I agree with him,” he said.

“Teams that have been up the pointy end of the competition for a while now or have higher profile players get the benefit of the doubt too often and that’s frustrating.

“That’s my opinion over watching footy for a long time.”

Michael Ennis found it hard to agree with Payten’s comments and said that the Cowboys coach had made a “big call,” while Cooper Cronk issued Payten a warning.

“He needs to be very careful with the words he chooses because he’s inferring something,” he said.

‘SHOULD BE CAREFUL’: Warriors, Broncos coaches clash over cannonball tackle

However they both agreed that Neame shouldn’t have been sin-binned.

“I thought the Griffin Neame one was hard on the Cowboys… but I thought the other two were definite sin-bins,” Cronk said.

But he backed Payten on the Neame decision.

“But the shot on the half has got to stop and Todd Payten was exactly right,” Ennis said.

“The ones we don’t like to see is when a halfback is drifting across field he is looking out to pass and someone hits him from behind and they get that whiplash motion.

“If a half is coming at you directly… where Griffin Neame had set himself, he dug deep into the line, he cannot leave (Walker), he was committed to the tackle, it is not late.

Get all the latest NRL news, highlights and analysis delivered straight to your inbox with Fox Sports Sportmail. Sign up now!!

“When you slow it down as slow as we are able to it looks a lot worse. At full speed he was completely committed to that tackle and we have got to stop sin-binning guys.

“In that game Penrith scored 14 points while Su’A was off the field, we can’t afford to have blokes sitting off. What is he supposed to do there? If the half shows and goes and beats him because he doesn’t commit the coach is up him all week.”