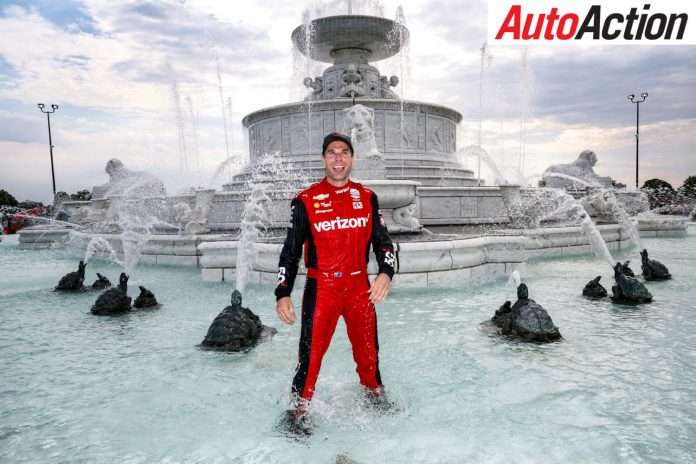 AUTO ACTION’s long-time columnist ponders Will Power’s place in history. After 16 years at the front of the IndyCar field, Will Power finally scored a mention on the evening news’ sports report back in his home country.

Well, the first I can recall, at least. You could have knocked me o­ff my futon with a feather.

Power’s victory the weekend before last in the Grand Prix of Detroit earned him eight seconds at the end of Nine’s Sydney sports news.

Rightly so, as he left the Belle Isle circuit with the championship lead in arguably the most competitive racing series on the planet.

After all, nothing makes the TV news without eye-catching footage. Or perhaps Scott McLaughlin’s woes in that race – spearing off­ into the run-o­ zone – caught the news editor’s attention and provided the real news value that Power’s win piggybacked upon.

Whatever, it was a rare moment in the sun in Australia for one of our country’s greatest ever racing exports.

Perhaps only Sir Jack stayed at the top for so long. Now about those 16 years…  Incredibly, Power’s Detroit win saw him extend his streak of scoring at least one victory per year in North America’s top-line open-wheel series to 16.

Sweet 16. It all started in 2007 with a win in Vegas, followed in 2008 with success in Long Beach, then on Edmonton’s airport circuit in 2009, which was his first win for Team Penske and in the IndyCar Series proper as re-unification occurred.

In 2010 the floodgates opened, as he notched up five of his 39 careers wins. Six followed in 2011, but not yet the championship. Unforced errors at critical times and some extraordinarily bad luck conspired to rob him of at least one title.

Power would have to be patient – and that didn’t always come easy.

He was duly crowned the 2014 IndyCar Series champion. Four years later he won the Indianapolis 500 – the first Aussie to do so.

Okay, so he made the evening news that night, but had to share the limelight with Dan Ricciardo who won the Monaco Grand Prix a few hours earlier in our country’s single greatest day of motorsport success.

The many F1 snobs out there – who consider themselves motorsport fans but look down their noses at other forms of racing, including IndyCar – barely acknowledged Power’s triumph in the biggest race of them all.

Then there are the many tunnelvisioned Supercar fans who, if it’s not Ford versus Holden, wouldn’t cross the road to watch a motor race. Some of these boofheads wouldn’t even have heard of Power. How sad.

Yet, the boy from Toowoomba – born on the same day, March 1, 1981, that another Queenslander, Dick Johnson, won his first Australian Touring Car Championship race – has achieved so much for so long.

Power is currently fifth among the all-time IndyCar race winners and second all-time when it comes to pole positions, with 57. Only Mario Andretti has scored more poles.

While 41-year-old Power is in the twilight of his IndyCar career, he’s seemingly getting better and better.

While pole positions and race wins are harder to come by these days, partly due to an everstrengthening field, an ability to accumulate points Scott Dixonstyle is more evident.

A good example came last weekend at Road America, when he was pushed o­ff the track early in the race by Devlin DeFrancesco.

The old WP would have ranted, raved and probably speared o­ again trying to recover.

The new WP simply got on with the business of salvaging what points he could, after coolly communicating to his crew over the radio, “Wait till I catch up with him after the race.”

Our man with the wild eyes did catch-up with the Canadian after the race – on the cool down lap – gently steering into the side of DeFrancesco’s Dallara.

It was enough to give the rookie a welldeserved clip over the ears, but not enough to seriously endanger either party.

The old WP would have caused a caused a major not-so-diplomatic incident. He’s come a very long way…  Power left Elkhart Lakes second in the points behind Indy 500 winner Marcus Ericsson with nine events still to run. Game on!

Interestingly, the aforementioned Dixon has also scored at least one victory per season for 16 consecutive years, albeit is yet to win in 2022 to extend his streak to 17.

The Brisbane-born New Zealander is another not given due respect from the narrow-minded Eurosnobs.

Hopefully both drivers’ vast achievements will receive deserved respect upon retirement. It’s just a pity IndyCar has flown under the radar in this part of the world since its annual Surfers Paradise shindig.

Geez, wouldn’t IndyCar would put on a show on the Adelaide Parklands circuit…

Anyway kids, if you’re not watching Power, teammate McLaughlin, Team Ganassi’s Dixon and the many fine drivers and interesting characters they battle, you are depriving yourself of a motorsport treat.

Catch this antipodean-infused fight before these greats hang up their helmets.

For more of the latest motorsport news pick up the current issue of Auto Action.