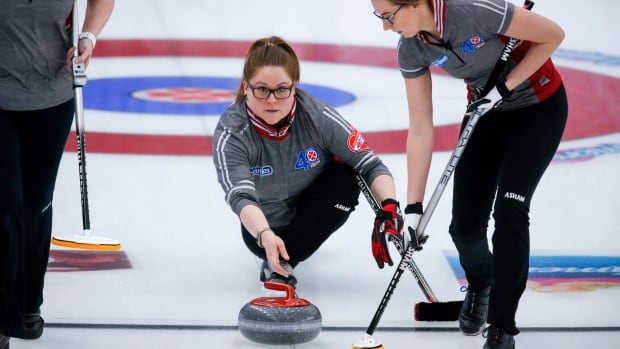 It’s official — Team Galusha will be representing the N.W.T. at the 2022 Scotties Tournament of Hearts.

Kerry Galusha, along with teammates Jo-Ann Rizzo, Margot Flemming and Sarah Kolton, and coach Shona Barbour, are heading to Thunder Bay later this month to compete for the chance to represent Canada at the women’s world curling championship.

As her team prepared for the N.W.T. women’s curling championship, scheduled to be held on Jan. 5 in Inuvik, Galusha was worried about more than just earning a spot in the Scotties.

Some team members had recently traveled, and did not want to risk spreading COVID-19 by going into a small community. And if anybody got sick, would they even be able to field a full team?

“It was pretty stressful, trying to make sure no one was exposed,” said Galusha.

However, the day before the championship was scheduled to begin, the territorial government announced a slate of new public health orders. The restrictions on indoor sports and gatherings forced NWT Curling to cancel the tournament.

“Of course we did not wish for that to happen, but we also understand that with the rapid spread of the Omicron [variant], this was something the [government of the Northwest Territories] had to enact to ensure that people are kept safe,” said Janie Hobart, competition director for NWT Curling.

She added that as last year’s territorial champions, Team Galusha earned the chance to represent the N.W.T at the Scotties once again.

“As soon as the event was cancelled, we knew we were going — and it was a relief,” said Galusha. “Of course, our team was really happy. We’re always excited to represent the North.”

Galusha first represented the N.W.T. as a skip at the 2001 Tournament of Hearts, and has led her team to the national stage dozens of times since.

This year, Galusha said the team has some “hefty goals” for the competition; right now, they have their eyes on the championship round.

“We’re excited,” she said. “We’re competitors, and we have a couple of weeks to prepare.”

But in 2022, that preparation looks quite different than normal. The same public health orders that scuttled the tournament in Inuvik have also closed the Yellowknife Curling Centre, where Team Galusha trains.

And though Galusha said this “affects our training a lot,” she added many other teams across the country are in the same boat, and is confident that her team will be ready to hit the ice in Thunder Bay at the end of the month.

“There are a lot of things you can do to prepare,” she said. “It’s not like, if you don’t practice for a week, you lose all your curling ability. So we have to remember that and try not to panic about ‘oh my gosh, we don’t have ice, this is going to be a disaster.’

“There’s a lot of other things we can do.”

For now, Team Galusha is focused on staying healthy, getting lots of sleep, working on mental preparation and studying videos from previous competitions.

And even though this was not the path she and her teammates had expected to take to the Scotties this year, Galusha said they are delighted to be going.

“It’s always an honour to represent the N.W.T., and it’s really special to us,” she said. “We never take it for granted.”