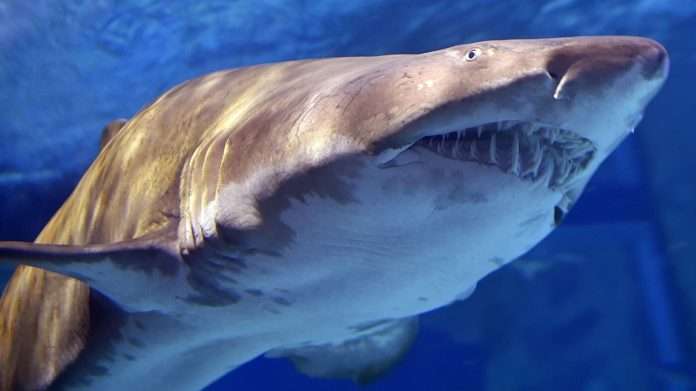 Are we alone in the universe? : NPR

Sand tiger sharks can grow to up to 10 feet in length, but juveniles average 3 to 5 feet. These sharks have a menacing appearance, but aren’t known for unprovoked attacks on humans.

Sand tiger sharks can grow to up to 10 feet in length, but juveniles average 3 to 5 feet. These sharks have a menacing appearance, but aren’t known for unprovoked attacks on humans.

A series of five shark attacks in two weeks on New York’s Long Island probably has many beachgoers in the Northeast hesitant to wade into the water.

But the sharks aren’t targeting humans — they’re after fish.

A sand tiger shark nursery located just off the Long Island coast and an abundance of bait fish close to shore could explain the recent string of unwanted encounters, according to Florida Program for Shark Research Program Director Gavin Naylor.

The sand tiger shark is one of the more menacing looking creatures lurking beneath the ocean’s surface. It can grow up to 10 feet in length and has a set of jagged teeth protruding from its jaws.

However, as far as sharks go, this big fish shouldn’t be cause for alarm.

The sand tiger is a relatively docile species of shark that wants little to nothing to do with humans. Attacks are almost always carried out by smaller juveniles that accidentally bite someone while chasing fish.

“Off the coast of Long Island there are lots of juvenile sand tiger sharks, a lot of them, and usually we don’t have a problem with them. But as you’ve probably heard reported, a lot of the baitfish — the bunker (the menhaden) — are actually closer in this year and there’s a lot more,” Naylor said. “… It’s a statistical fact that sharks don’t target people. If they did, we’d have about 10,000 bites a day.”

Scientists with the Wildlife Conservation Society’s New York Aquarium announced the discovery of a sand tiger shark nursery off the southern Long Island coast in 2016. Naylor said this could explain why encounters, such as the five in the past two weeks, didn’t result in life-threatening injuries.

Adult sharks are considerably larger and are capable of delivering more damage in the event of an attack, but they’re also more mature, and less likely to mistake a human for food.

What to do if you see a shark

Having said all that, there are some extra precautions you can take to better avoid an unwanted encounter with sharks: don’t swim between dusk and dawn; don’t go into the water alone; avoid flashy jewelry, which can be mistaken for fish scales; don’t go in if you’ve got an open wound.

If you’ve done your due diligence and still come face to face with a shark, the best thing you can do is remain calm — easier said than done. Square up with the shark and don’t take your eyes off of it, Naylor said. Move purposefully, while watching the shark, and back towards the shore.

And if the shark gets too close for comfort — or it tries to bite you — defend yourself. Your best bet is to punch or kick the shark in the nose or gills.

Having said all of that, our fear of sharks is a bit out of proportion, Naylor said. The odds of getting bit by a shark are a little less than 1 in 4 million, according to the International Shark Attack File. In fact, you’re 10 times more likely to get killed by fireworks.

“You’re probably 200 times more likely to drown in the ocean than you are to get bitten by a shark,” Naylor said. “And I think that people aren’t that worried about drowning.”