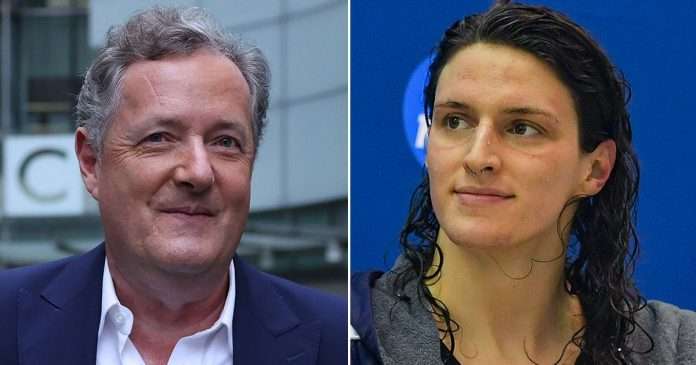 The video will auto-play soon8Cancel

Controversial television personality Piers Morgan has hit out at reports suggesting transgender swimmer Lia Thomas could compete for Team USA at the Olympics, insisting she is a threat to the ‘integrity of women’s sport’.

In March, University of Pennsylvania star Thomas won the NCAA Division I national championship in the women’s 500-yard freestyle. After previously suggesting she is aiming to take part in the 2024 Olympics trials, Thomas has now declared she’ll compete for a spot in Paris.

She told Good Morning America that she intended to keep swimming, adding: “It’s been a goal of mine to swim at Olympic trials for a very long time, and I would love to see that through.”

The rise of Thomas has become a talking point since she started to receive increased publicity. She has found success by losing muscle mass and strength due to testosterone suppression and hormone replacement therapy (HRT).

Morgan is among those to oppose Thomas and her eligibility to compete alongside other women. He was particularly frustrated by the suggestion of a place on the Olympic squad for the Games in two years time.

“This cannot happen,” Morgan wrote on Twitter. “She’d have never been anywhere near Olympic standard had she stayed competing as a man – which says it all about the threat she poses to the integrity of women’s sport.”

The debate surrounding transgender athletes has been at the forefront of sporting discourse in recent months. Swimming is reportedly one of the sports currently in the process of altering its rules, and cycling is in a similar situation following the uproar regarding Emily Bridges’ attempt to compete as a woman earlier this year, which was rejected.

Lia Thomas won the NCAA title back in March, with her success leading her right into the firing line of Piers Morgan
(

Do you think Lia Thomas should be allowed to compete at the Olympics? Let us know in the comments section.

Thomas has explained how she became infatuated with swimming early in her life but ultimately struggled with gender dysphoria, which describes a feeling of unease with her birth sex. She has repeatedly insisted that trans women ‘are not a threat to women’s sports’, but World Athletics president Sebastian Coe has suggested otherwise, claiming in March that ‘gender cannot trump biology’.

Even if she was cleared to take part in trials for the United States women’s swimming team ahead of the Paris Games, Thomas is no guarantee to qualify. However, Morgan has made his feelings on the matter clear by declaring the prospect is unfair on other Olympic hopefuls.

The 57-year-old has criticised Thomas in the past, comparing her to an athlete cheating using performance-enhancing drugs. He has also accused Thomas of ‘destroying women’s sport’.