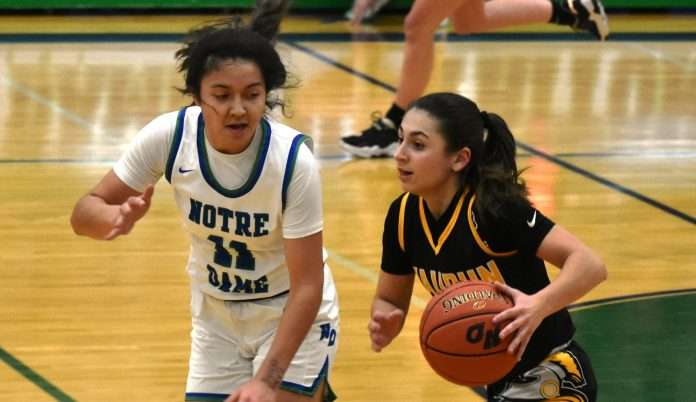 GREEN BAY – If you were at the Notre Dame Academy girls’ basketball game Monday night against Waupun, you witnessed a great game between two of the best teams in the state.

“There was lots of hype around this game,” Notre Dame Head Coach Sara Rohde said. “It was two good teams playing. It was a good time of the year to play this game. Playing teams like Waupun (in nonconference) prepares us for the postseason.”

Trailing 51-41 with about five minutes remaining, the Tritons scored 11 of the next 12 points to force overtime.

Down 52-50 with less than 10 seconds remaining in regulation, Fayta drove the lane but missed her contested shot attempt.

Sydney Whitehouse grabbed the rebound for Notre Dame and tied the game with her put-back basket, forcing overtime.

During the extra session, the Tritons outscored the Warriors 10-5, with Fayta hitting another five free throws.

In total, Notre Dame ended the game on a 21-6 run, with 13 of those points coming from the charity stripe.

“The mood was somber at halftime, but the girls were excited at the end,” Rohde said. “In the first half, we kept passing the ball around the perimeter. In the second half, we did a better job of attacking and making (Waupun) defend us. I liked our defensive intensity with our press.”

Behind the hot shooting of Illinois State commit Abbie Aalsma, the Warriors led 27-23 at intermission.

The senior Aalsma poured in a game-high 28 points on 10-for-23 shooting, including 5-for-11 from beyond the 3-point arc.

“She was the most confident player for (Waupun) at the end of the game and wanted the ball,” Rohde said. “She has a quick release, and you have to be on her. She doesn’t need lots of time or room. I thought our girls adjusted as the game went along.”

The Tritons took their first lead of the game, 32-31, at the 17:07 mark of the second half when Fayta, who ended with a team-high 21 points, banked in a 3-pointer from the top of the key.

From there, Waupun surged ahead with a 20-9 run to set up the dramatic last few minutes of play.

The Tritons have now knocked off two No. 1-ranked teams in the state in two separate divisions.

In addition to the victory over the Warriors, Notre Dame also beat Hortonville, the No. 1-ranked Division 1 team, Dec. 21.

“I don’t think too much about that, but it’s a nice feather in our caps,” she said. “Waupun is a good team and will do well in the (postseason) tournament. We won’t see Hortonville or Waupun again this season (because we are in different divisions.”