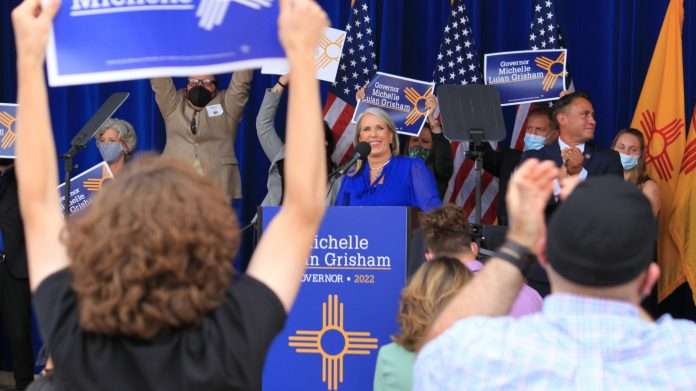 New Mexico’s Democratic governor, Michelle Lujan Grisham (center), smiles as supporters cheer during a campaign rally in Albuquerque, N.M., on June 3, 2021. The rally was cut short as protesters chanted loudly beyond the walls of the outdoor venue.

New Mexico’s Democratic governor, Michelle Lujan Grisham (center), smiles as supporters cheer during a campaign rally in Albuquerque, N.M., on June 3, 2021. The rally was cut short as protesters chanted loudly beyond the walls of the outdoor venue.

ALBUQUERQUE, N.M. — Former television meteorologist Mark Ronchetti has come out ahead in a crowded field to claim victory in the New Mexico GOP primary for governor, according to a race call by The Associated Press.

He was a favorite to win thanks to his name recognition as a longtime local TV personality and a former U.S. Senate candidate.

Though he’s never held political office, this is Ronchetti’s second time earning a GOP nomination in the state. He lost in a race for an open U.S. Senate seat in 2020 to Democratic Sen. Ben Ray Luján but fared well with nearly 46% of the vote.

He’ll take on Democratic incumbent Michelle Lujan Grisham in November. Though Ronchetti led the five-way Republican race in fundraising, according to campaign finance reports from the secretary of state’s office, he raised less than half of what Gov. Lujan Grisham brought in for the primary contest, where she ran unopposed.

Lujan Grisham was the state’s secretary of health, then served three terms in the U.S. House before being elected governor. She led the state through the pandemic with some of the strictest public health mandates in the country.

Most of the candidates in the crowded GOP primary field built campaigns criticizing Lujan Grisham for her pandemic response — expressing outrage about closures and citing negative impacts to the state’s small businesses. One contender, GOP County Commissioner Jay Block, referred to the state’s shutdown orders as “unconstitutional” on his campaign website, though the state Supreme Court upheld the administration’s authority to institute them.

Lujan Grisham is also campaigning on her handling of COVID — including the state’s lengthy indoor mask mandate that was lifted in February, well after most other states. She’s also holding up New Mexico’s effective vaccine rollout that’s led to more than 90% of adults in the state getting at least one shot. And as a counter to the economic messaging of the state’s GOP, she’s touting relief packages for individuals and businesses as having protected the health of the state economy.

Ronchetti is running as a political outsider who puts people above party loyalties. He beat out three-term State Rep. Rebecca Dow for the nomination who serves as the chair of the state’s House Republican caucus.

As the country’s Republican candidates are calculating their proximity to Trump, Dow described herself in a primary debate on local news station KOAT as “a lifelong conservative who’s never disrespected President Donald Trump.” She worked to position Ronchetti as unsupportive of the former president. She blasted him in a campaign ad as a “Never Trumper,” and for a comment he made in 2019 that he “​​used to be a Republican until the orange one,” referring to Trump at a University of New Mexico climate change event. Ronchetti has defended the comment in a televised debate as a joke made to college students and his campaign says he remains a registered Republican.

Dow also flashed her political experience, but during the campaign, Ronchetti pushed back on Dow for her voting record in the state legislature, especially at the height of the pandemic, highlighting her approval of state pandemic relief aid, which received bipartisan support. The legislation rolled in funds for those who didn’t receive a federal stimulus check, including undocumented people. He said on his campaign website that the policy encourages illegal immigration, and he will do away with it if elected.

Ronchetti has said he’ll form a “Border Strike Force” under the state’s Department of Public Safety and redeploy the National Guard to the border if elected. In 2019, Gov. Lujan Grisham pulled most Guard troops back from the border, refuting the idea that the area was in crisis. They had been ordered there the year before by former Republican Gov. Susanna Martinez in response to a call from Trump.

Amid record homicides in Albuquerque — the state’s largest city — both gubernatorial candidates are pitching “tough-on-crime” initiatives. While Ronchetti is calling for expanding recruitment and pay for officers and tougher laws to keep people behind bars, so has Lujan Grisham. She’s increased funding for police departments across New Mexico, and oversaw 16% raises for state police officers. She named crime as one of her priorities in the 2022 legislative session, though a bill she pushed for that would have altered the state’s law to keep more people behind bars pending trial, failed.