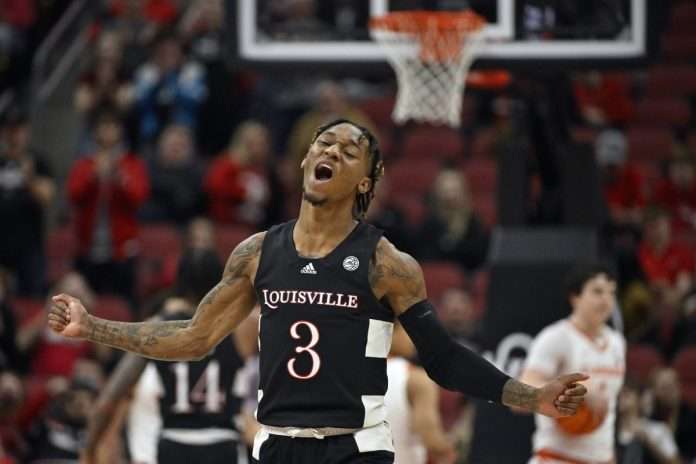 LOUISVILLE, Ky. – It might be the first week of May, but it’s never too early to take a glimpse into the future and look at how the 2022-23 roster for the Louisville men’s basketball program could shake out.

While there are still several roster spots left to fill, the Cardinals are starting to get some idea as to what Team 109 will look like when they lace ’em up for the first time.

But, the program also got confirmation from six players that they would returning for next season. Sydney Curry, El Ellis, Mike James, Jae’Lyn Withers, J.J. Traynor and Roosevelt Wheeler all announced that they would come back and play for first-year head coach Kenny Payne.

Speaking of Payne, after about a month on the job, he finally landed his first commitments at his alma mater. Former Tennessee forward Brandon Huntley-Hatfield was the first to join the fold, followed by Class of 2022 prospect Devin Ree not long after.

That’s not the only good recruiting news that the program has seen in recent days. After being committed for four months and hinting numerous times that he wants to remain with the program, ’22 prospect Kamari Lands finally signed his National Letter of Intent.

Given all that we know now about the current state of Louisville’s roster, below is an early look into what the depth chart next year could look like:

El Ellis’ return to Louisville is a massive win for Payne. While his 2021-22 campaign certainly had its up’s and downs, the JUCO transfer displayed enormous potential on numerous occasions. He finished as Louisville’s third-leading scorer, and also their top three-point shooter from a percentage standpoint. But considering there are no other primarily ball handlers currently on the roster, Louisville will need to hit this position big time amongst the remaining ’22 prospects and the transfer portal.

Louisville will also need to take a strong look at shooting guard prospects. With Noah Locke entering the portal, there are no remaining shooting/scoring guards, and Ellis is now the only true guard on the roster. Mike James can slide over and play the two if need be, but he is coming off of an Achilles injury.

The wing for Louisville will look completely different than it did last season, and it’s the youngest position on the team. Kamari Lands is a starting solid option, but Mike James could see meaningful minutes if he is completely healthy. With James likely going to see split reps between the two and the three (all depending on what remaining guards UofL brings in), Ree will be Louisville’s true backup wing. All-in-all, there is a lot of length and shooting potential here.

Speaking of potential, there is loads of it at the power forward. Brandon Huntley-Hatfield got progressively better over the course of his freshman year, and his toughness and versatility could vault him into an early starting role. Withers largely struggled this past season, but was able to turn in on over the final month and look like the pseudo-NBA prospect many expected him to be. J.J. Traynor was a no-show for almost the entire year thanks to setbacks last offseason, but working with Payne should be good for him.

The Cardinals also look promising at center as well. Sydney Curry looked borderline unstoppable on offense over the final month of the season, but will have to drastically work on his defense. Roosevelt Wheeler also had flashes of potential, but got lost in the big man shuffle behind Curry, Withers and Williams. Louisville will need to add another big, but with Payne’s reputation as a stellar post player developer, there is a lot to be excited about in the paint.