Home Politics Labor’s cabinet has been sworn in. Here’s a who’s who of ministers 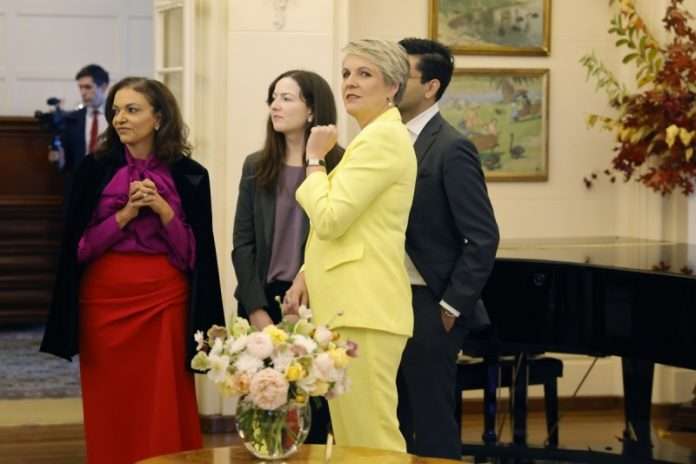 A little over a week after Labor claimed victory at the federal election, the new government’s first full cabinet has been sworn in.

When compared to the Coalition’s previous few cabinets, there are noticeably more women this time around, and Labor’s cabinet is also more diverse.

Because Labor is split into left and right factions, the two sides have a power-sharing agreement as to the makeup of the front bench.

It’s then up to the Prime Minister to actually allocate individual portfolios.

And although Labor hasn’t been in government since 2013, almost half of the new cabinet have experience as government ministers.

Here are the faces of the new Labor cabinet.

Most of the country should know who Anthony Albanese is by now, given he’s the new Prime Minister. Under Kevin Rudd and Julia Gillard he was the minister for transport and infrastructure, plus minister for regional development. Mr Albanese belongs to the party’s left-wing faction but ran a comparatively centrist campaign.

As deputy Labor leader, Richard Marles was always going to be Deputy Prime Minister. He’s also the current minister for defence, and had a very brief stint as minister for trade during Kevin Rudd’s second time as PM in 2013.

Penny Wong is a stalwart of the Labor Party and has been a senator for 20 years. She served as the minister for climate change and minister for finance under the Rudd and Gillard governments and was the Labor leader in the Senate after that. As Australia looks to repair several key relationships in the region, Ms Wong, who was born in Malaysia, becomes the first Asian foreign minister and the first openly lesbian front bencher.

Jim Chalmers worked as an adviser to several state premiers and federal ministers – all from the Labor Party – before his own tilt at Parliament in 2013. He even wrote his PhD thesis on Paul Keating. Mr Chalmers’ wife was a staffer for Julia Gillard, who also attended the couple’s wedding.

Minister for the Public Service

Katy Gallagher spent more than a decade in ACT politics before moving into federal politics in 2019. From 2011 to 2014, she even served as chief minister of the ACT – the territory’s equivalent of a premier. Before that, Ms Gallagher was an organiser for the Community and Public Sector Union, which represents government employees, among others.

Minister for Trade and Tourism

Don Farrell is a long-time senator and former head of the retail union, the Shop, Distributive and Allied Employees Association. When he briefly considered a pivot to state politics in 2014, Labor premier Jay Weatherill threatened to resign. Mr Farrell was one of only a few parliamentarians to abstain from the marriage equality vote in 2017.

Minister for Employment and Workplace Relations

Minister for the Arts

Tony Burke previously held several portfolios under the Rudd and Gillard governments including agriculture, sustainability and multicultural affairs. His electorate includes the diverse suburbs of Western Sydney. He was previously an organiser for the retail union, the Shop, Distributive and Allied Employees Association.

Minister for Health and Aged Care

Mark Butler was the minister for mental health and ageing under the Rudd and Gillard governments, and later held several other portfolios for a shorter period. Mr Butler helped Mr Albanese’s bid to become Labor leader in 2013, only for him to lose to Bill Shorten. Before entering politics, he held a senior role in the Liquor, Hospitality and Miscellaneous Union.

Minister for Climate Change and Energy

Chris Bowen is a long-time Labor parliamentarian and held numerous portfolios under the Rudd and Gillard governments, working all the way up to becoming treasurer in 2013 before Labor’s defeat. A few years before entering federal politics, he was the mayor of Fairfield in Sydney’s west.

Minister for the Environment and Water

Tanya Plibersek is the other top member of Labor’s left faction, after Mr Albanese. She was deputy opposition leader under Bill Shorten and was widely viewed as a potential candidate for party leader. Ms Plibersek held five portfolios at different times under the Rudd and Gillard governments, including health, women and human services. She was first elected to Parliament in 1998 at the age of 28. 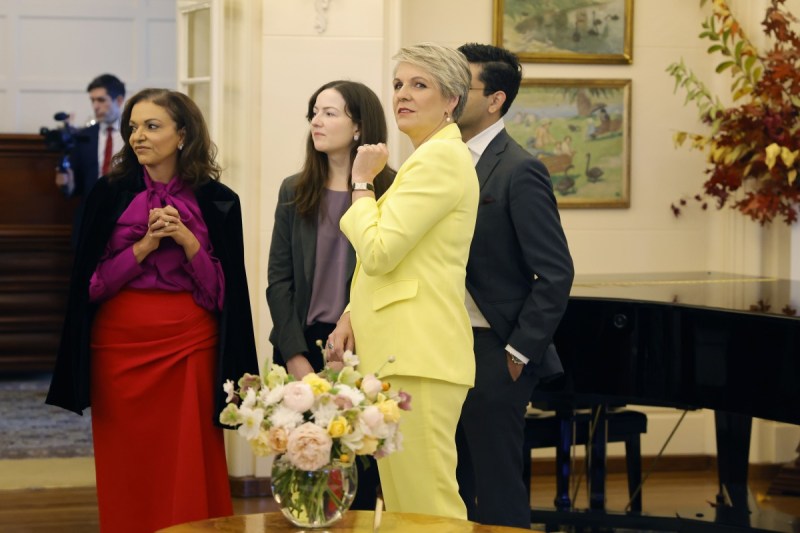 Catherine King is another long-time Labor MP who has served since 2001. She was the minister for both regional Australia and road safety under the Rudd and Gillard governments.

Linda Burney is a Wiradjuri woman who has previously held senior positions in the NSW state government cabinet and rose to deputy opposition leader shortly afterwards. She pivoted to federal politics at the 2016 election. Ms Burney is the first woman to hold the portfolio of Indigenous Affairs, and only the second Aboriginal person to do so after outgoing minister Ken Wyatt. The incoming assistant minister for Indigenous Australians is Yanyuwa woman Senator Malarndirri McCarthy.

As minister for social services, Amanda Rishworth will oversee mental health support, among other things. She was a practising psychologist before entering Parliament in 2007. However, before that, she was an organiser for the SDA and served as the president of Young Labor in 2000.

Minister for the NDIS

Bill Shorten was the former opposition leader, who led Labor through two elections. At the 2016 election Labor gained several seats but it wasn’t enough to beat the Coalition, while in 2019 the party also lost despite polls pointing to a Labor victory. Since then he’s been relegated to a less prominent role in the cabinet.

Attorney-General Mark Dreyfus briefly held cabinet positions during Kevin Rudd’s second stint. Before entering politics in 2007, Mr Dreyfus had roughly 20 years of experience a barrister across commercial, defamation, constitutional and environmental law. He’s also served as a director of the Law Council of Australia and sat on the Victorian Bar Council.

Minister for Skills and Training

Brendan O’Connor has been in Parliament since 2001 and held numerous portfolios under the Rudd and Gillard governments, including home affairs, employment and human services. In the 1990s, he was assistant national secretary of the Australian Services Union.

Jason Clare was previously the minister for home affairs, minister for justice and minister for defence materiel under the Rudd and Gillard governments. Before entering Parliament he was a senior adviser to former NSW premier Bob Carr.

Julie Collins is the only Tasmanian in the cabinet, and the only Labor parliamentarian not to have finished high school. She began working for the Labor Party as an administrative assistant at a young age in 1987, before taking on a slew of different state roles for Labor politicians, premiers and government departments.

Michelle Rowland entered Parliament in 2010, while Labor was in opposition. She previously worked as a senior telecommunications lawyer and has also been a mayor and healthcare director. 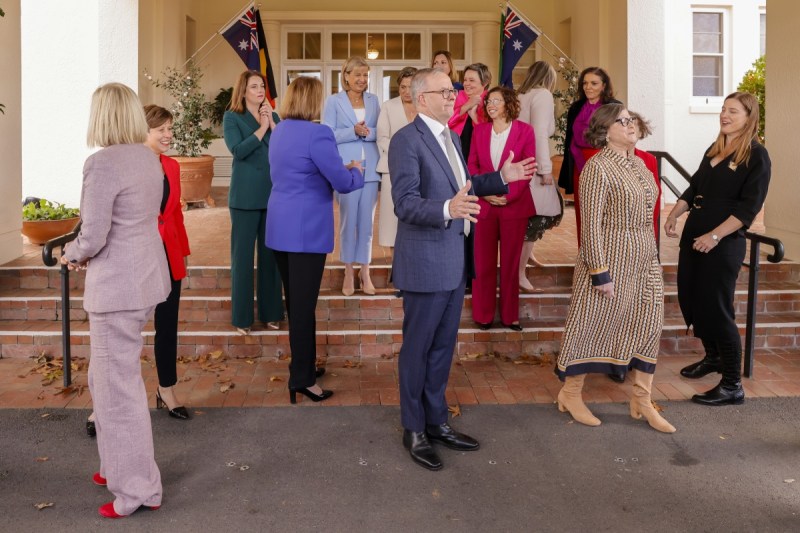 With 10 women in cabinet, Anthony Albanese claimed to have “largest number of women ever in an Australian cabinet”. That number climbs to 19 women when including the outer cabinet and assistant ministers. Photo: Getty

Madeleine King is the most recently elected member of the cabinet, entering Parliament in 2016. She is also the only Western Australian. Ms King was a lawyer and political adviser.

Minister for Agriculture, Fisheries and Forestry

Murray Watt was elected as a senator in 2016, but prior to that he was an MP in the Queensland state parliament. He initially worked in law before entering the public service and ultimately working as chief of staff to former Queensland premier Anna Bligh.

Minister for Industry and Science

Ed Husic once worked as a researcher for former Chifley MP Roger Price, and took over his seat when Mr Price retired at the 2010 election. He became involved with the Communications, Electrical and Plumbing Union of Australia and became national president before entering Parliament. He is of Bosnian descent and was the first Muslim to be elected federally.

In 2004, at the age of 23, Ms O’Neil was elected mayor of Dandenong, which makes her the youngest female mayor in Australian history. Two years later she was awarded a prestigious Fulbright scholarship to study a master of public policy at Harvard University in the US. Ms O’Neil worked as a manager at McKinsey & Company before being elected to Parliament.