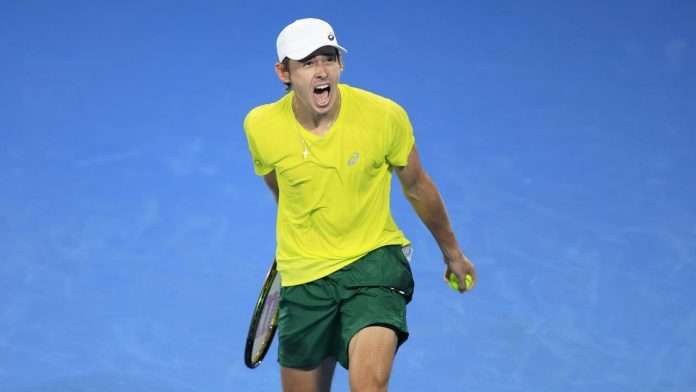 Australia’s Alex de Minaur has bounced back from a disjointed 2021 and thrown the gauntlet down ahead of the Australian Open by stunning World No. 7 Matteo Berrettini of Italy in straight sets, 6-3, 7-6, at Sydney’s ATP Cup.

The win at de Minaur’s spiritual home of Ken Rosewall Arena inspired Australia to a stunning 2-1 Group B tie victory over the Italians, who are among the favourites to take out the entire tournament.

Before a ball had even been served, the Aussies were up against it.

Just hours from Australia’s first match of the team tournament that kicks off the men’s calendar, James Duckworth was ruled out with a hip injury.

De Minaur (World No. 34) was left with all of the pressure on his shoulders and none of the tipsters on his side as the Aussies hoped to keep in touch with a best-of-three victory.

To win would’ve been to equal the biggest victory of his career on ranking, and not only that, he was going to have to do it against last year’s Wimbledon finalist, who polished off the likes of Dominic Thiem, Gael Monfils and Roberto Bautista Agut en route to last year’s ATP Cup final.

So when the hometown hero opened up a comfortable lead in the first set, the Sydney spectators were understandably excited.

They erupted when he took out the first set, 6-3, as a just reward for keeping his foot on the accelerator for the duration of play to that point.

The second set seemed destined for a tie-break from the get-go, with each man taking turns to strike at the other.

With each game he claimed, de Minaur was no less exultant in his celebrations than a young Lleyton Hewitt, who sat metres away as the Aussie team’s captain on Sunday night.

More than one foot fault left the Italian rattled, before the match progressed into the second set tie-breaker it so richly deserved.

With the home crowd rising with each point, the 22-year-old Sydneysider sent a ripple through the tennis world by taking out the tiebreaker 7-4 and, thus, the match.

De Minaur endured his share of setbacks last year, the most notable of which was a bout of coronavirus that forced him out of the Tokyo Games.

But the Aussie appeared confident he had put the Olympic heartbreak behind him.

“I’m in the best shape of my life and I’m ready to have a big year.”

It was the fifth time de Minaur had defeated a top-10 player, but his first since January 2020, per tennis reporter Val Febbo.

Perhaps spurred on by their countryman’s heroics, Aussies Luke Saville and John Peers sealed the tie victory by dusting off Italy’s Simone Bolelli and Berrettini in the doubles match.

Berrettini was a late inclusion in place of Fabio Fognini, who was subbed out for tactical reasons.

After dominating the first set, the two Aussies found their momentum slipping in the second before edging their rivals out in a tie-break to claim victory in straight sets, 6-3, 7-5.