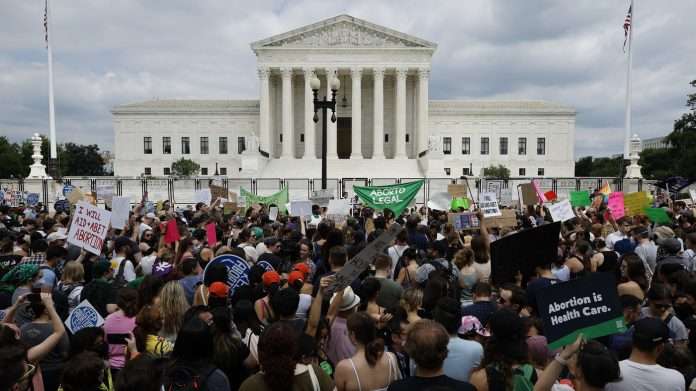 Thousands of abortion-rights activists gather in front of the U.S. Supreme Court after it overturned the landmark Roe v Wade case and erased a federal right to an abortion.

Thousands of abortion-rights activists gather in front of the U.S. Supreme Court after it overturned the landmark Roe v Wade case and erased a federal right to an abortion.

It’s hard to overstate the importance of what the Supreme Court did Friday with its outright overturning of Roe v. Wade, the landmark ruling that made abortion legal in this country nearly 50 years ago.

“It’s the legal equivalent of a nuclear bomb,” NPR’s Nina Totenberg, the dean of Supreme Court reporters, noted, adding that it’s possible this ruling opens the door for the potential “for undoing other areas of personal autonomy,” from contraception to interracial marriage.

There are lots of questions we have about what happens now to society and in politics. Here are six:

The Supreme Court is leaving it to the states to decide how to regulate – or outlaw – abortion. Twenty-two states have trigger laws in place that will outlaw abortion immediately.

Almost all are in red states, or places Donald Trump won in the presidential election. The U.S. is now going to have a patchwork of laws.

In red states with legislatures controlled by Republicans, an abortion is likely to be banned or made much more difficult to get.

And in blue states, places Democrats traditionally win in presidential elections and control the legislatures, abortion access will remain in place. It will make for a very unsettling round of new laws and regulations across the country.

2. Does the court go further, after other rights?

Justice Thomas wrote that he wants the court to reexamine precedents on cases dealing with contraception, same-sex marriage and even same-sex sex.

Other conservative justices said they disagree with that, but few thought the Supreme Court would go even this far and outright overturn Roe.

One thing is clear, this isn’t Chief Justice Roberts’ court anymore. He wrote a concurrent opinion advocating for upholding Mississippi’s 15-week ban, but not to go beyond that.

The court’s conservative supermajority didn’t listen. It’s their court now. If they band together, there’s no telling how they can – and will – reshape American society and culture.

3. What will this mean for the Supreme Court’s credibility?

Public opinion has been clear and consistent – a solid majority of Americans want abortion, with restrictions, to remain legal, but the Supreme Court opinion outright overturning Roe is woefully out of step with the American public.

The court’s credibility has declined and opinion of it has become more polarized this year. With the leak of the Roe draft opinion in May, it took a nosedive.

Gallup released numbers on Thursday that showed just 25% now say they have a “great deal” or “quite a lot” of confidence in the Supreme Court. That’s the lowest in the 50 years that Gallup has been asking the question.

4. Will the idea of doing away with the filibuster and packing the court become more mainstream?

Expect there to be a movement among progressives to add more justices to the court.

“The idea of adding Supreme Court justices, which I thought didn’t have a leg to stand on, I think, at some point, may have traction,” Totenberg noted.

Democrats don’t have the votes for that at this point. But given the court’s credibility problem – and how far out of step overturning Roe is with the broader public – do these ideas start to catch on?

5. How do Democrats and liberals respond more broadly?

It took half a century of meticulous planning, vetting and building a movement to get to this point for anti-abortion-rights conservatives.

They have not only mobilized for presidential elections, but also down-ballot ones, like state legislative races. Democrats have built up some apparatus to compete in those races in recent years after being largely absent for a decade or so, before and during the Obama administration.

But with the relative young ages of the Supreme Court nominees and the stranglehold Republicans have on many statehouses across the country, this is an aircraft carrier that’s likely to take a very long time to turn – certainly far longer than one or two election cycles.

While surveys show that Roe being overturned would fire up Democrats to vote more than Republicans, the decision is unlikely to change the forecast for control of the House.

Republicans are favored to take the House and that’s unlikely to change. So far, in the short term, people say they are more concerned about inflation and gas prices as motivating factors.

But this ruling undoubtedly introduces a wildcard. And it will be important to closely watch how the political landscape moves in the coming weeks.

This ruling not only will affect this upcoming election but the next one – the 2024 presidential election. That is especially true considering former President Trump is the frontrunner for the GOP nomination, and it’s because of his Supreme Court nominations that this day is here.

It would have been a very different world had Hillary Clinton won in 2016.